After 1300 km of mountain roads, driving 30 h in second handed Japanese sleeping buses (I would rather call them buses with air turbulences, since they throw you up in the air all the time) and again people throwing up, we arrived to capital of Vietnam – Hanoi.

Once again we met a lot of wonderful people, ate amazing food and saw dazzling places. For the first time we came across to some troubles, but did or will solve them one way or another – nothing can stop us – we keep on going INTO THE WILD!!!!!!

In next few paragraphs i will resume the last week with good and bad things happening to us.

Graceful historic Hoi An is Vietnam’s most atmospheric and delightful town. Once a major port, it boasts the grand architecture and beguiling riverside setting that befits its heritage, but the 21st-century curses of traffic and pollution are almost entirely absent. Whether you’ve as little as a day or as long as a month in the town, it’ll be time well spent.

We arrived to Hoi An on Tuesday morning and we stayed in amazingly beautiful and extremely cheep home stay with a family, who took very good care of us for 3 days. Everybody spoke English (which can be a challenge most of the time in Vietnam), they rented us bicycles and helped us arrange all the details for our next stop. 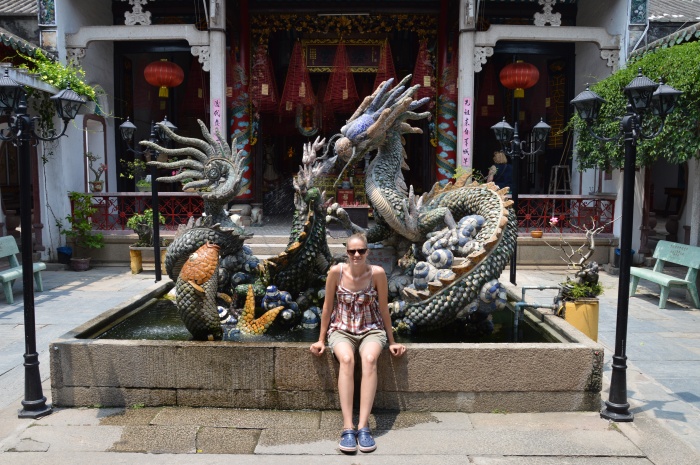 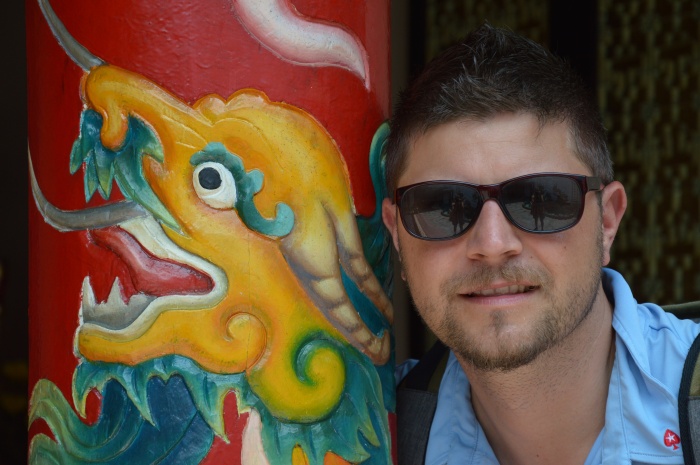 At this point I need to mentioned that my ear was blocked for the 2nd day in a row. It got stuck on Sunday while snorkeling in Nha Trang, where either my eardrum exploded or a lot of water got into it. I didn’t pay to much attention to it. I thought, few days and it will get better – later on I found out it wasn’t the case.

Later that night we went again for the walk, this time to see the famous stands and lanterns scattered all around the city. The whole old town was covered with thousands of colorful lights, truly amazing!!!  We also decided to try their famous fresh beer (Bia Hoi), arguably the cheapest beer in the world (0,10 eur per beer). Bia Hoi is a beer that was introduced to Vietnamese by Czech brewers and is made and drunk daily.

On the 2nd day we rented bicycles from our host family and took a ride around the coast of  Hoi An. There are 2 mayor beaches in the town – one full of tourist and the other one – An Bang – more wild and less crowded. Since for us is all about INTO THE WILD, you can imagine which one we choose 🙂 – BTW my ear was still full of something that day.

At night we found out, that our argentinian friend Julian, who we met in Ho Chi Minh, was  in the town so we decided to grab some cheep beer and good food. We finished the night early since we knew we had an early bus drive to our next stop – HUE.

Palaces and pagodas, tombs and temples, culture and cuisine. A Unesco World Heritage site, this deeply evocative capital of the Nguyen emperors still resonates with the glories of imperial Vietnam, even though many of its finest buildings were destroyed during the American War.

Hue owes its charm partly to its location on the Perfume River – picturesque on a clear day, atmospheric even in less flattering weather. There’s always restoration work going on to recover Hue’s royal splendour, but today the city is very much a blend of new and old: modern homes sit cheek by jowl with crumbling century-old Citadel walls, and sleek new hotels tower over stately colonial-era properties. Hue remains a tranquil conservative city. There’s no real bar scene and local tourism authorities have lamented the fact that locals go to bed before 10pm.

Immediately after checking in, a very nice receptionist made us a deal to hire a private driver (20 eur) for the whole afternoon that took us to see  royal tombs of  Tu Duc and Khai Dinh. We also saw Budist Temple Thien Mu, where in the early 80’s a person was murdered and the site became the focal point of anti-communist protests. 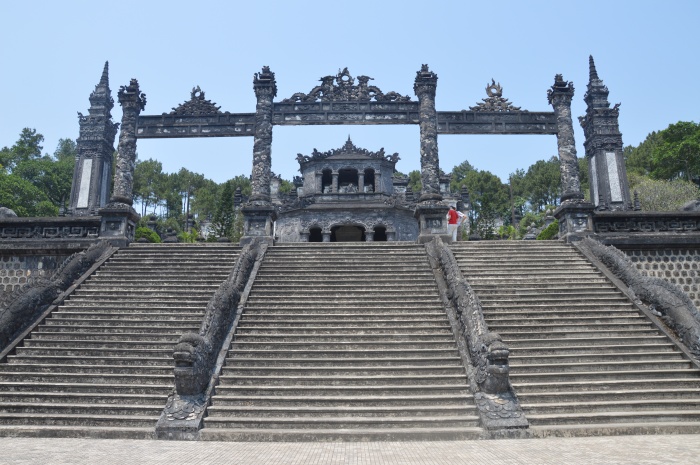 Later at night we found out that there was a festival in Hue that is held only every 2 years. The festival hosts a lot of music, cultural and culinary events so we decided to visit one. We decided to visit a main stage and, as the ticket seller explained us, see the most important event of the whole festival. The tickets were not cheap, 15 eur – expensive even for Europe – so we truly expected amazing Vietnamese artistic event. It came out to be a FASHION SHOW!!!! Well once again INTO THE WILD spirit and we decided to enjoy it anyway. The fashion show was representing typical Vietnamese dresses Ao Dai, which were designed influenced by different countries themes (Spanish, Indian, French, Japanese and plenty more…) – BTW my ear was getting worse and worse. 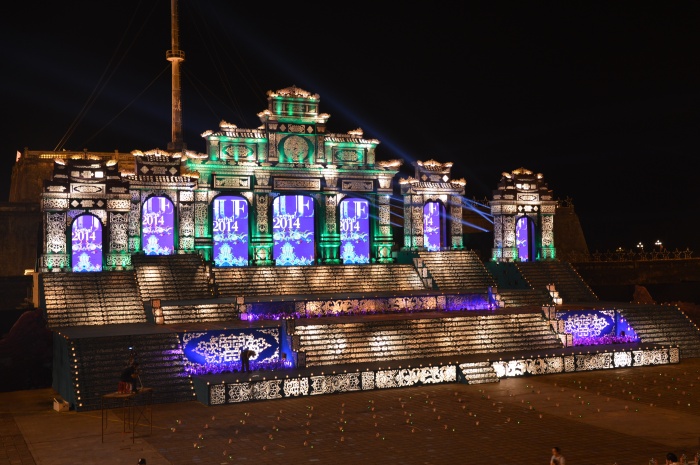 On Wednesday we took a short walk around Hue, visiting Royal Palace, once reserved solely for the personal use of the emperor, his wives and concubines. The only servants allowed into this compound were buddhist monks who would pose no threat to the royal concubines. There used to be 150 buildings in the complex but almost all got entirely destroyed in the wars, with only 20 remaining today (all in a desperate need of restoration). 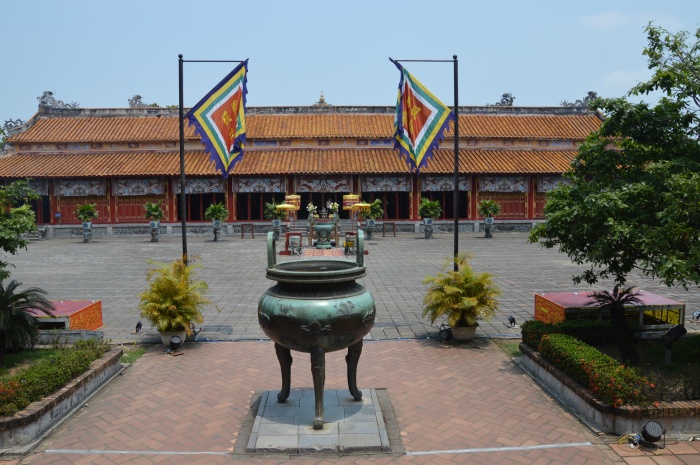 Later that night we took a 14 h bus drive to Hanoi, once again with several people throwing all over the place 🙂 INTO THE WILD ride – my ear situation still with no change.

Saturday morning we arrived to Hanoi. Big city with 7.1 MIO people but we will tell you more about it next week, after we discover it more.

In the end I would just like to mention two small troubles we run into – but couldn’t won’t and can’t stop us in our little adventure.

First anecdote is with my bank card. Since I was searching and trying in several ATM machines to withdraw the money without fees, my bank, thinking that my card was stolen and somebody is using it in Vietnam, blocked the card. The whole saturday I was running around like crazy, thinking my card got broken and that from now on I will depend completely on Maja :). Well lucky I manage to reach my bank and they could unblocked it. So now I can again spend money for INTO THE WILD adventures 😉

Second anecdote is regarding my ear. After 6 days of not hearing nothing, I finally decided to go to Hospital. Since I knew that English will be an issue and that it will be hard to explain my problem in hospital, I asked our kind host of the hotel to write me down on sheet  of paper in Vietnamese, about my problem. So with paper in my hand I went to hospital and luckily enough the only person in the whole hospital who can speak english was working that day so was easier to explain my problem. They discovered I have a big infection of ear. They cleaned the ear as much as they could and gave me 1 kg of medicine to treat it for next couple of weeks. Will keep you posted about my progress…

Ok at this point I think I said enough for this week so that is it.

Until next post I send you all a ‘deaf’ greeting and tons off love.

And to all the people that celebrate Easter I wish  happy and peaceful Easter.

Love you all Andrej & Maja